We use cookies to ensure that we give you the best experience on our website. You can change your cookies in your browser at any time.

You can be on that exit point for five minutes, battling all these voices in the head, and all of a sudden, a calmness comes over you, and you realise … it’s good, let’s do it. We used to call that “the moment”. Andy Guest, UK base jumper.

Is there something us mere mortals can learn from “the moment”? I believe so. As an adventure psychologist and neuroscientist my work explores this question. Research has shown simple techniques can help people access this meditative state.

In extreme sports, the consequences of athletes’ decisions can be life threatening. Scientists have described base jumping as the most extreme of extreme sports. It involves parachuting from fixed structures including buildings, antennae, bridges and cliffs.

By one calculation, there’s a 50 times increased risk of dying compared to skydiving. Having said that, there has only been one fatality in the UK in the last 30 years.

But base jumpers aren’t all big impulsive personalities. They are just as prone to self-doubt as the rest of us.

Stress hampers performance. In the face of threat, parts of the brain involved in reasoned decision-making shut down. This can impair judgement.

But this physiological response can change. Research shows experienced skydivers have increased control over their autonomic nervous system response to stress, which governs vital functions such as blood pressure, heart rate and breathing.

Base jumpers chase a feeling of calm, not adrenaline.

Ordinarily, the stress response is associated with activity in the sympathetic branch of the autonomic nervous system. This division regulates the fight-or-flight response. The sympathetic system also relaxes the bladder, speeds up heart rate and dilates eye pupils.

Yet, some people show increased activity in another branch as well: the parasympathetic nervous system, normally associated with restorative functioning after exposure to stress as well as life-sustaining processes such as digestion. Activation of the parasympathetic branch helps people stay calm even when highly stimulated.

There are tactics anybody can use to restore balance in the nervous system. For example, slower breathing increases parasympathetic activity. This goes hand-in-hand with being mindful of unwanted thoughts. 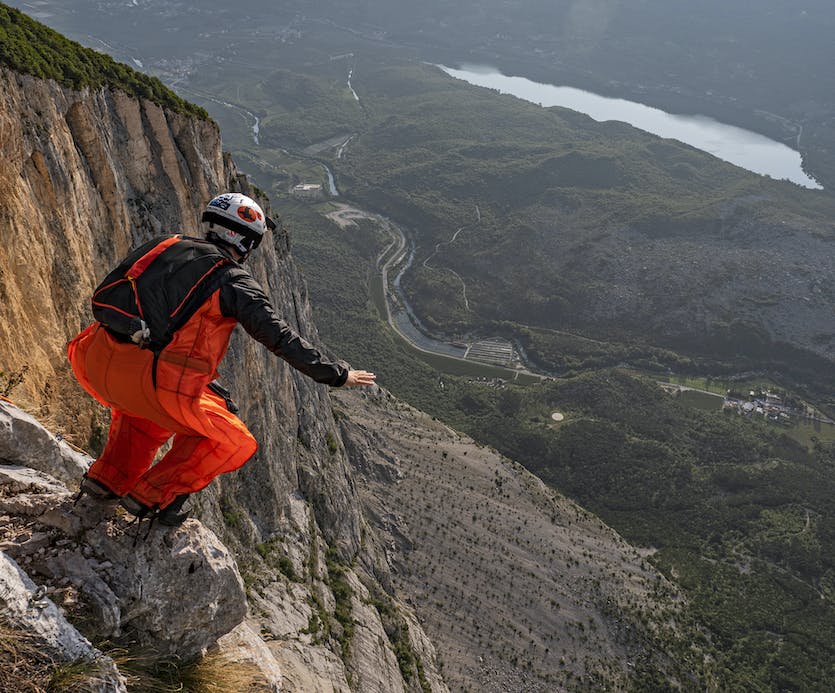 Waiting for the Moment.

Adopting a “challenge mindset” can also enhance people’s ability to perform under pressure. This involves seeing a situation for the opportunities it presents instead of seeing it as threatening. Motivational self-talk can help too: saying things like: “I can do this.”

This approach won’t transform you into a cool-headed master of your fears overnight. But practising these techniques for even a few days can result in beneficial effects on nervous system activity.

Harder than it sounds

This is not to say severe anxiety can be cured with breathing techniques.

The inner voice of self-doubt can make it difficult to activate the parasympathetic branch. This is because your mental resource is being diverted to a set of brain regions known as the default mode network. The default mode network is where mental processes involving reflection happen. This is the source of that inner voice which can turn into self-critical chatter, focusing on negative events from your past.

When areas of the brain involved in thinking and emotional processing become over active, this can result in rumination and anxiety. Rumination is excessive, repetitive thinking about the same event that focuses on the negative and results in emotional distress. It’s difficult to switch off.

Learning to manage the default mode can help us develop resilience.

Research shows that high performers tend to be people who can stay focused even when under extreme cognitive demands. In one study participants performed memory based tasks intended to stretch mental processing capacity to the limit. Those who struggled with the demands showed increased brain activation in task-focused zones, putting in extra effort to compensate. Those who consistently performed at a high level showed lower levels of activation, as if taking it in their stride. So high performers kept a cool head. 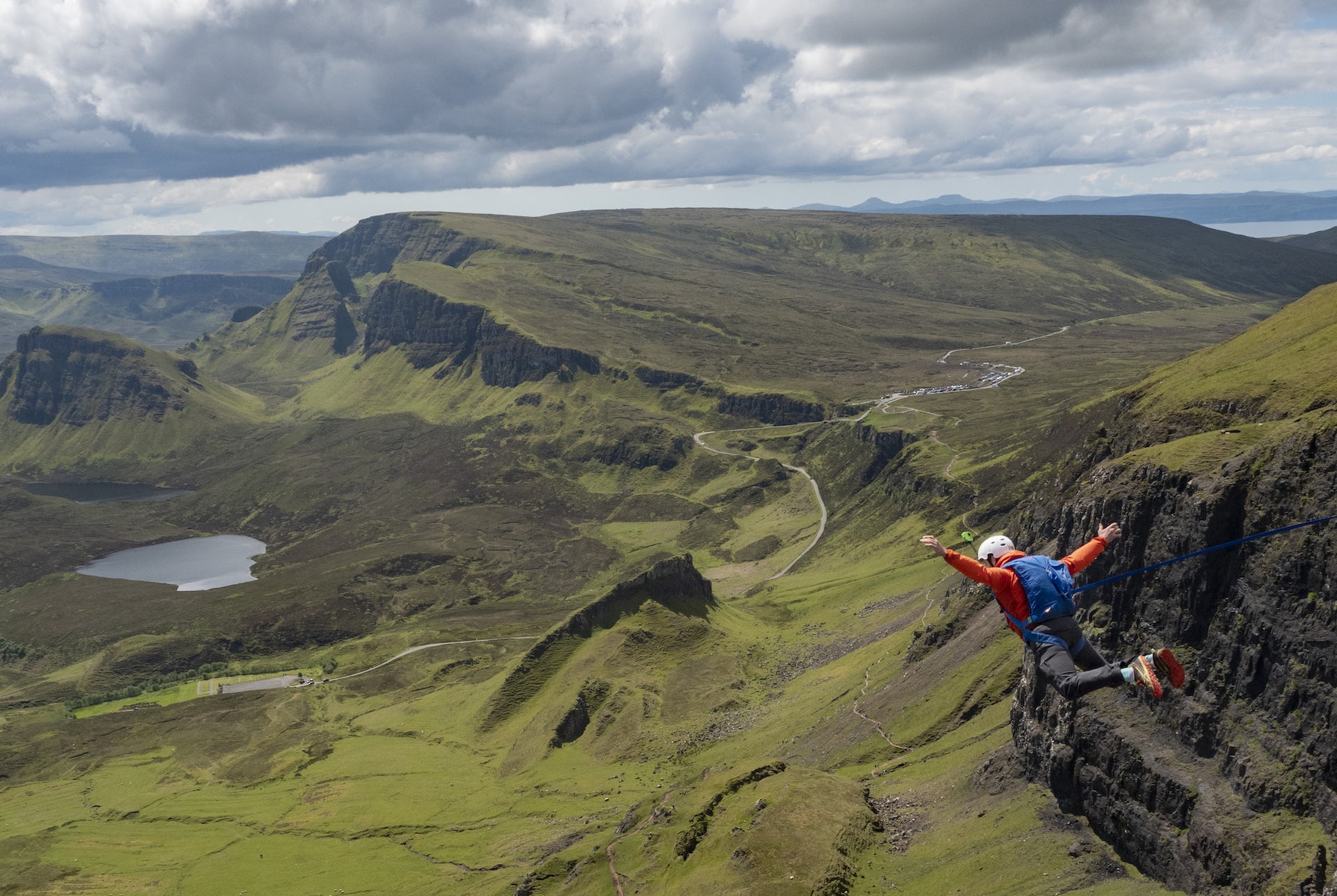 This is not the moment to panic.

My research is looking at ways to study people’s performance in extreme situations, using wearable heart rate monitors as a proxy for measuring brain processes. This aims to identify how the brain responds in the “moment” described by base jumpers. Measuring physiological levels of stress can help us identify the optimal states needed to act under pressure.

Whether it’s driving through a new city at rush hour, or accepting a life-changing opportunity, we must overcome those voices battling in our heads or they will prevent us from moving forward. In order to access that special moment for ourselves, we need to tune our internal radio to filter out the noise of self-distrust.

Instilling some balance to our brain-body responses using techniques such as mindfulness and breathing, can help us stay in control. Without the calming influence of a balanced nervous system, people’s minds have a tendency to see threat all around, rather than viewing life in terms of chances for growth.

So, stop. Breathe out slowly, reassure yourself it’s OK, you’ve got this. This is a challenge, something to get stuck into. Overcoming this insecurity is like realising that you’ve been trying to drive with the hand brake on. So, let’s release it and drive off.

This article is republished from The Conversation under a Creative Commons license. Read the original article.

16 students were presented with their international scholarships this week at a reception in the Student Life Building.

LJMU is strengthening its collaboration with Malaysian universities by expanding its research and skills development partnerships into the realm of sustainable and resilient rail and seaports infrastructure.